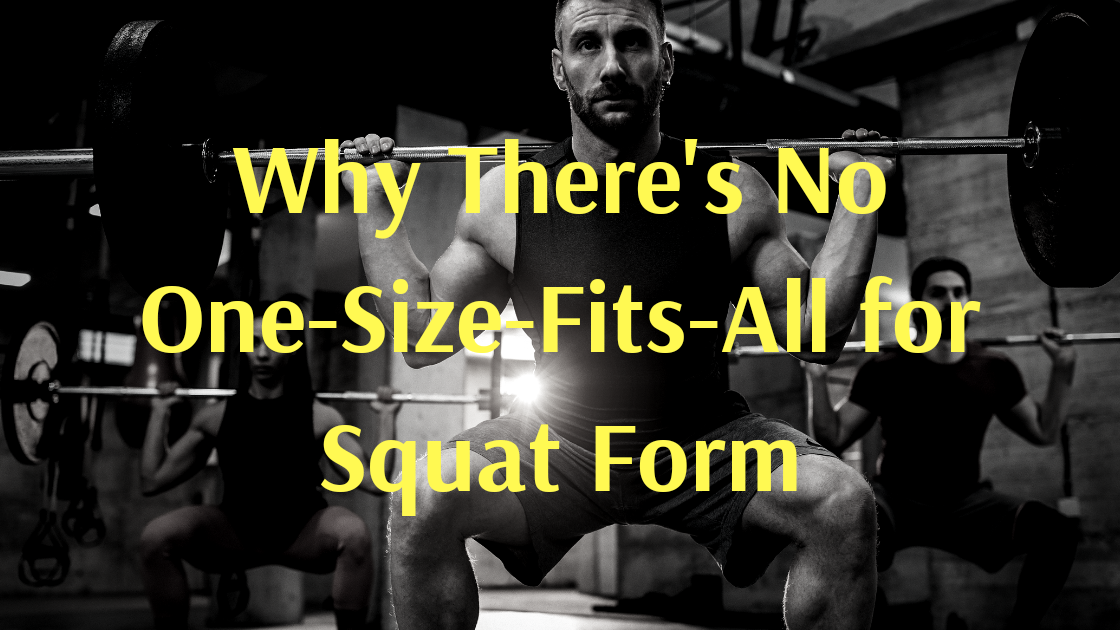 Your Best Squat Technique is Determined by YOUR Anatomy

Contrary to popular belief, there is absolutely no one-size fits all in terms of squat. We’ve all heard of the popular cueing for a squat – toes slightly pointed out, feet at shoulder width, and squat past parallel. Unfortunately, there are anatomical differences between individuals where this setup is simply not the most effective, or safe, way to squat – especially under heavy loads. Don’t believe me? Keep reading.

Anatomy of the Hip

The hip is a ball-and-socket joint – where the head of the Femur (thigh) fits into the Acetabulum (the socket on the Pelvis). It is the most mobile joint of the body, and is analogous to the shoulder of the upper extremity. Because the joint is constructed to be so inherently mobile, it is reinforced by a Labrum, a joint capsule and several ligaments and muscles.

Now, humans are not all constructed the same – and slight differences in the hip socket (ie. Depth of the socket, angle of the socket) as well as changed in the head of the Femur (femoral neck angle, degree of rotation (ie. Anteversion, Retroversion)) can alter squat mechanics

It’s easy to see someone who has to turn their feet out excessively to squat, and label that to poor hip mobility – then prescribe numerous hip mobility drills, only to cause a pinching in the hip and no difference in their squat.

Anatomical Variations of the Femur

These are 2 Femur’s taken from individuals that were the same height. We see one of them points more upwards, while the other is nearly lateral. Do you think these people will be able to squat the same with that much of a difference?

In this picture, we see nearly identical femoral neck angles, but the length of the neck is differs greatly between the two. Generally, the more of the head covered by the socket, the less mobility available – so the individual on the left would have far greater hip mobility than the one on the right simply due to anatomical variance

3. Torsion of the Femur

This is a view of the orientation of the Femoral head (the ball in the ball and socket joint) from the top down. Of these 2 individuals, the one on the left will hit a bony block with a  narrower squat (ie. Front squat), while the other will front squat with ease. The solution? The individual on the left will have to turn their toes out, and the joints will be in the exact same position as the right.

Anatomical Variations of the Pelvis

1. Orientation of the Socket

In the picture above, we have 2 pelvis’ that are even in diameter. One of them has socket oriented more anteriorly, where we can virtually see into the socket – whereas the other has sockets that slope downward. The individual on the right will have an issue in a full squat, as they will butt the head of the Femur into the socket – and would therefore benefit from a narrower squat, vs the individual on the right who would benefit from a back squat

Lastly, we look at depth of the socket. The socket on the left is significantly deeper than the right, which means that there is more coverage of the Femoral head; resulting in a decreased mobility in the hip in all directions. The shallower socket means less coverage, which allows greater freedom of the Femoral head

This is by no means a way for an individual to blame their hip morphology and neglect their rehab. These are bony differences between joints, and simply one piece in the overall picture of how someone moves. It’s a way to determine the best way to load their joints in a strength and conditioning program, but there are always ways to improve the mobility of the soft tissues around the joint (Capsule, Muscles, Ligaments) though active mobility exercises and treatment

Athletes wont squat the same, and they shouldn’t – but the general principles remain the same (knees track over the toes, heels stay on the ground, back remains neutral). This article is to shed light on WHY people feel more comfortable in different positions. However, a vast majority of the time – the reasons are because of mobility that CAN be influenced (ie. Ankle dorsiflexion, thoracic spine extension, etc) and not just the hips.

I started out in this field because I was inspired by the care and sports rehab that I received when I was an athlete. From competitive gymnastics to soccer to varsity track and field, I’ve been in and out of my fair share of clinics!

I have a passion for helping people return to doing what they love. Whether that be sports, recreational activity, or returning to a pain-free everyday life. I want to work as a team with each individual to create a treatment that fits their mental and physical needs. I believe that exercise and activity is an essential component of wellbeing and want my clients to be able to engage in these activities without compromise.

Education-wise I went to Western (GO STANGS!) for my undergrad, earning a Honours Bachelor of Arts with Specialization in Kinesiology and followed that with a Diploma of Massage Therapy from Sutherland-Chan.

In my spare time, I like to lift weights, read, play volleyball and spend time with family. I’m a huge sports fan, especially the Leafs, Raps and Jays!